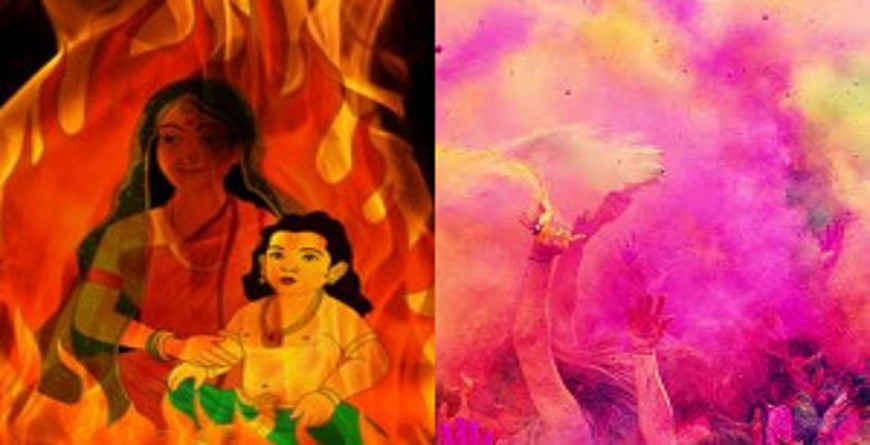 Holi is a hindu Festival.
It is celebrated in 2 Days.
Holika dahan Story:- Once upon a time there was a demon king by the name of Hiranyakashyapu who won over the entire earth.He wanted to take revenge for the death of his younger brother who was killed by Lord Vishnu. So to gain power, he started performing hard penance to please Lord Brahma.One day, Brahma appeared before him and granted him five special powers :-   After gaining these boon, he became too powerful. But nothing is immortal, there is end to everything.
The cruel king has a young son named Prahalad, who was a great devotee of Lord Vishnu. Prahalad had never obeyed his father’s order and kept on worshipping Lord Vishnu and refused to worship his father.
Hiranyakashyapu tried several ways to get his son to worship him. But all his efforts failed and he ordered his servants to kill Prahalad a number of times but Deity Vishnu rescued him every time.
Hiranyakashyapu had a sister names as Holika. Holika had been blessed by a boon which made her immune to fire. So Hiranyakashyapu asked Holika to enter a fire with Prahalad in her lap. The demon king was sure that there was no way Vishnu could save Prahalad from death now!
Holika sat on a pyre and coaxed young Prahalad to sit in her lap. She then ordered her attendants to light the pyre. Legend has it that Holika had to pay the price of her cruelty with her life. Holika was burned to death because her boon was that she would be untouched by fire if she was alone!
Prahalad, who kept chanting the name of Deity Narayana all this while, came out unharmed, as Deity Vishnu had blessed him once again for his unwavering devotion. Thus, Holi derives its name from the burning of Holika. And, is celebrated as a festival of victory of good over evil.
The defeat of Holika signifies the burning of all that is bad. After this, Lord Vishnu killed Hiranyakashipu. But it is actually the death of Holika that is associated with Holi. Because of this, in some states of India like Bihar , a pyre in the form of bonfire is lit on the day before Holi day to remember the death of evil.

Colour Holi :-
There is separate story for this. The story goes that the very colourful Indian god, Lord Krishna was jealous of his soul mate Radha's fair complexion, since he himself was very dark.
Naughty young Krishna complained to his mother Yashoda about this injustice of nature. To placate the child, doting mother asked Krishna to apply colour on Radha's face and change her complexion according to his choice.
Playful and mischievous Krishna appreciated the idea and implemented it. The game of applying colours thus gained so much popularity that it became a tradition and later it turned out to be a full fledged festival.
Till date, lovers desired to colour and be coloured by their mates. The application of colours has in a way become an expression of love.

You can share your knowledge to many peoples by just sitting at your bed. Share your ideas online.